Warning: Use of undefined constant DATABASE_SERVER - assumed 'DATABASE_SERVER' (this will throw an Error in a future version of PHP) in /nfs/c10/h08/mnt/141421/domains/mikemango.com/html/wp-config.php on line 32
 Mizuno | Mike Mango

Mizuno What if Everybody Ran?

In the world of running shoes, industry giants like Nike, Adidas and Reebok spend hundreds of millions of dollars each year in advertising, ensuring that their shoes are top of mind for consumers when they go into stores to make a purchase.

Mizuno doesn’t have the luxury of such an advertising budget. They enjoy only 1% of the industry share of voice, making it impossible to compete through traditional means.

The best way to capture the hearts of more Running Junkies was to take a stand for something bigger than just the shoes we were trying to sell.

We decided to leverage Mizuno’s belief that running has the power to transform your day — your life — and maybe even the world.

So we built a program around a simple question: “What If Everybody Ran.” And what we hoped to get back: big growth in site visits and social engagement. We commissioned a team of faculty and students at the University of North Carolina Kenan-Flagler Business School to come up with some statistically valid provocations around what would happen if every American became a runner.

Also, we created the Mizuno Baton app to do just that as part of the “What if Everybody Ran” campaign. For every mile run with their baton app, Mizuno donated $1 to Back on My Feet, a nonprofit that uses the power of running to help homeless men and women turn their lives around. Runners could share their donation/mile totals straight from the app on social media, pass the baton to friends and family, check their leaderboard position and upload run photos.

To launch the campaign, we ran a 30-second version of this manifesto as a TV commercial (Mizuno’s first) in the local Boston CBS affiliate and on national ESPN media on the most important running day of the year: the 2014 Boston Marathon. We produced a series of 15-second online videos capitalizing on our analysis and other amazing outcomes we imagined would occur if the world was filled with runners. These videos ran as rich media units alongside traditional banner ads in online properties including Runner’s World, Men’s Health and Women’s Health. To help promote the app we worked with Map My Run to identify the most popular running routes in top metro markets. We then created digital OOH billboards around these routes to promote and entice runners to download the app. Everything about the campaign was structured to drive word of mouth and social sharing.

For the duration of the campaign, we averaged over 12,000 site visits per day to mizunorunning.com, an increase of +69% versus our 2013 average. Weekly traffic peaked at 36,000 visits on the day of the launch. Average time on site was over 4:30, an increase of 67% versus 2013 average. The campaign has added 72,367 Facebook Fans, a 49% addition to the base since the start of the campaign. More than 6,000 people tweeted with the hashtag #IfEverybodyRan, leading to 24.7 million impressions during the month following launch. The campaign was featured in articles in the New York Times, Time, Ad Age, BroBible and Huffington Post, among others. And the best part, Runners completed three laps around the world and over 15,000 runs with the baton, raising almost $80k for Back on My Feet. 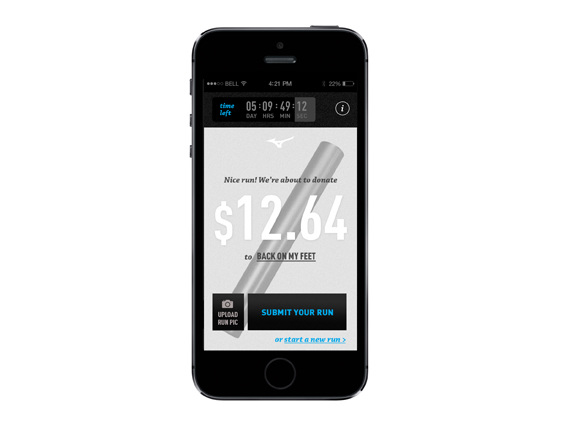 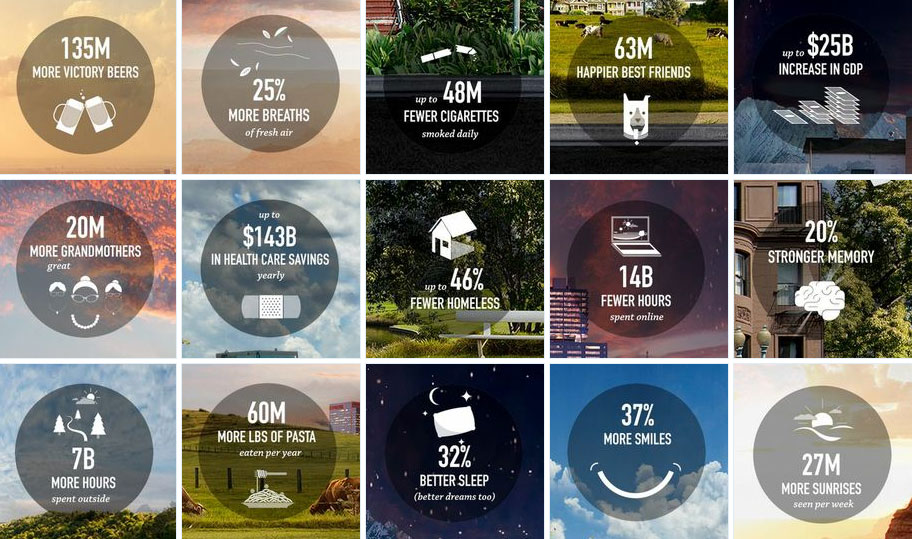